Officially called Piazza Vigliena but affectionately termed Quattro Canto (four corners), this beautiful Baroque area of Palermo marks the intersection of two of the city’s principal streets – Via Maqueda and the Corso Vittorio Emanuele. A masterclass in the era’s rich sculptural heritage, each of the quattro canto are studded with statues of the four Spanish kings of Sicily and the four patronesses of Palermo, as well as symbolic representations of the four seasons. As the gateway to Palermo’s evocative historic district, Quattro Canti is the ideal place to start your explorations of the atmospheric and centuries-old city centre, Vecchio Centro.

Walk in ancient footsteps as you stroll down Corso Vittorio Emanuele, which runs from Porta Felice to Porta Nuova – the monumental city gate of Palermo that stands next to the handsome Palazzo dei Normanni. This enchanting street passes churches, palazzi and the city’s breath-taking cathedral, and was established when the Phoenicians founded Palermo. You may hear it referred to it by its former name – Cassaro – which comes from the Arabic for ‘castle’.

From Porta Felice, look out for the fortification that once protected the port – Castello a Mare or ‘castle by the sea’. Despite damage wrought by the Second World War, it has been carefully restored to its original grandeur and visitors today are met by an impressive Norman keep and the remains of its Renaissance-era star-shaped defence.

Nearby, the harbourside neighbourhood of Castellammare o Loggia promises a feast for all the senses – from the spectacular ancient Phoenician and Greek art on display at the Regional Archaeological Museum Antonino Salinas to the vivid fruit and vegetable stalls in the bustling Mercato Vucciria. 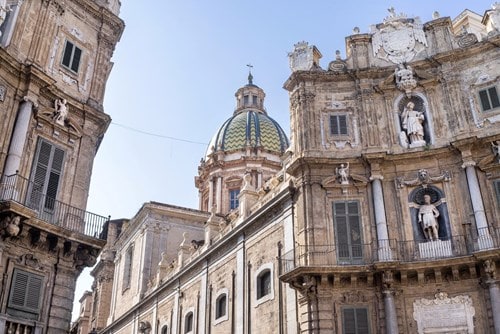 To get a sense of the Sicily’s signature Arab-Norman architectural style, the Cattedrale di Palermo – officially known as Santa Maria Assunta – is an essential stop. As invaders and settlers from across the continent have come and gone, the building has evolved to display an enchanting blend of influences. From the tombs to the treasury and the panoramic views from the roof, the magnificent space sparkles with religious relics and geometric decorations.

In the historic quarter of Kalsa, three beautiful Baroque churches embody a faded grandeur. Situated on Via Torremuzza, the stone façades, impressive frescoes and gilded decorative details of Santa Teresa Alla Kalsa, Santa Maria Della Pietà and the Noviziato dei Crociferi promise a spiritual diversion. While nearby, in Piazza Marina, the monochromatic stone windows of the 14th-century Palazzo Steri of the Chiaramonte family are of such architectural significance, the style has since become known as Chiaramonte Gothic.

Home to the Orchestra Sinfonica Siciliana, it’s impossible to miss the grand arch that marks the entrance to the imposing Politeama Garibaldi Theater. A guided tour of this storied building uncovers highlights such as the stage curtain, which was painted in 1891 and depicts a scene from Greek mythology. Our Concierge can arrange tickets to a performance here, or at the equally impressive Teatro Massimo Vittorio Emanuele. The ornate gold-and-red auditorium of this enchanting opera house serves as the backdrop to stirring ballet performances and classical music recitals. 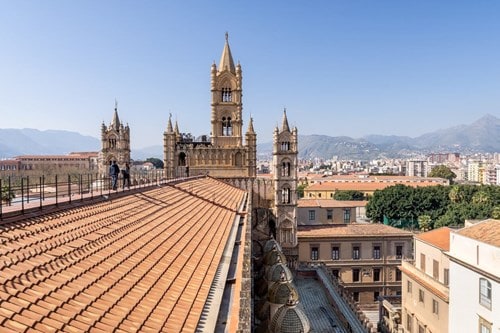 At the heart of the historic centre, Pretoria Fountain is one of the city’s most celebrated sights, however, that wasn’t always the case. Having stood in a fragrant Florentine garden for years, the huge water feature was divided into 644 sections and transported to Sicily in 1574, where it was painstakingly reconstructed. Surrounded by white marble sculptures of mythological figures and Greek gods, locals were initially embarrassed by the scantily clad statues and, as a result, started to refer to the piazza in which the fountain stood as the ‘square of shame’. It’s a different story today, with Palermitans claiming it as one of their proudest monuments. Rising majestically behind the fountain, the Palazzo Pretorio – or Palace of the Eagles – is the seat of Palermo’s City Council.

Having reached the opposite end of Corso Vittorio Emanuele, the Palazzo dei Normanni awaits. The seat of Norman kings and many Sicilian rulers since, it continues to be the sight of the island’s regional parliament. A tour of the royal apartments takes visitors past the mosaic-lined Sala dei Venti and 12th-century Sala di Ruggero II bedroom. While there, take a moment to delve into the building’s suitably regal chapel. Cappella Palatina dazzles with its precious stone-studded mosaics that recount Old Testament tales.

Discover the Quattro Canti from Villa Igiea. Book your stay by emailing reservations.villaigiea@roccofortehotels.com or call +39 0632888590.