From the wilds of Scotland to pre-historic sites in Puglia, exploring on foot is the most engaging way to travel. As you tread the rugged highways and byways, history is carved into the topography of the countryside and imbues you with an unparalleled sense of place. Our concierge teams, whose understanding of place makes their knowledge invaluable, have recommended a series of hikes to bring their destinations to life.

Edinburgh and beyond by foot

The urban gateway to the wild Scottish countryside, Edinburgh and The Balmoral are a few steps (or a short journey by car or train) from hills to hike and sandy coastline to explore. David Musk, head concierge at The Balmoral for 16 years, recommends The Dry Dam walk, a two-hour loop around the extinct volcano of Arthur's Seat.

The closest walk to the hotel, this two mile trail begins by clambering up to the highest point in the royal Holyrood Park. To extend the walk - and add a hint of history - detour to 12th century Duddingston Village, a favourite of Sir Walter Scott and Robert Louis Stevenson. As well as a secret garden you’ll discover The Sheep Heid Inn; Scotland's oldest drinking den.

For those wanting to reconnect with nature and the rugged beauty of Scotland, there are 282 ‘Munros’ – mountains in excess of 3,000 feet – to summit. Beinn a'Ghlo is the closest, by car, to Edinburgh and towers above history-steeped Blair Atholl, home to Britain’s only private army and a whitewashed fairy tale castle.

Stroll to an ancient temple in Sicily

In western Sicily, in the mountainous region midway between Verdura Resort and Villa Igiea, our local concierge at Verdura Resort and Rocco Forte Private Villas, Emanuele Venezia, recommends hiking to the remarkably intact Temple of Segesta. Hauntingly beautiful and less crowded than Sicily’s Valley of the Temples in Agrigento, the Doric-columned temple and hilltop amphitheatre offer a more intimate view into history, starting from the third century BC.

An easy 45-minute walk on clear paths, this journey through time takes you from the ruined temple to the theatre where, in summer, open air classical performances are staged. As you climb, wonderful views over the bay of Castellamare and the Tyrrhenian Sea slowly unfold giving an unforgettable panorama of Sicily’s northern coastline.

Prefer a guided walk? Emanuele recommends Verdura Discovery Trek where one of the walks directs you along the stunning coastline beneath the historic town of Torre; pack a bathing suit for a refreshing swim in the sea following a half-day hike. 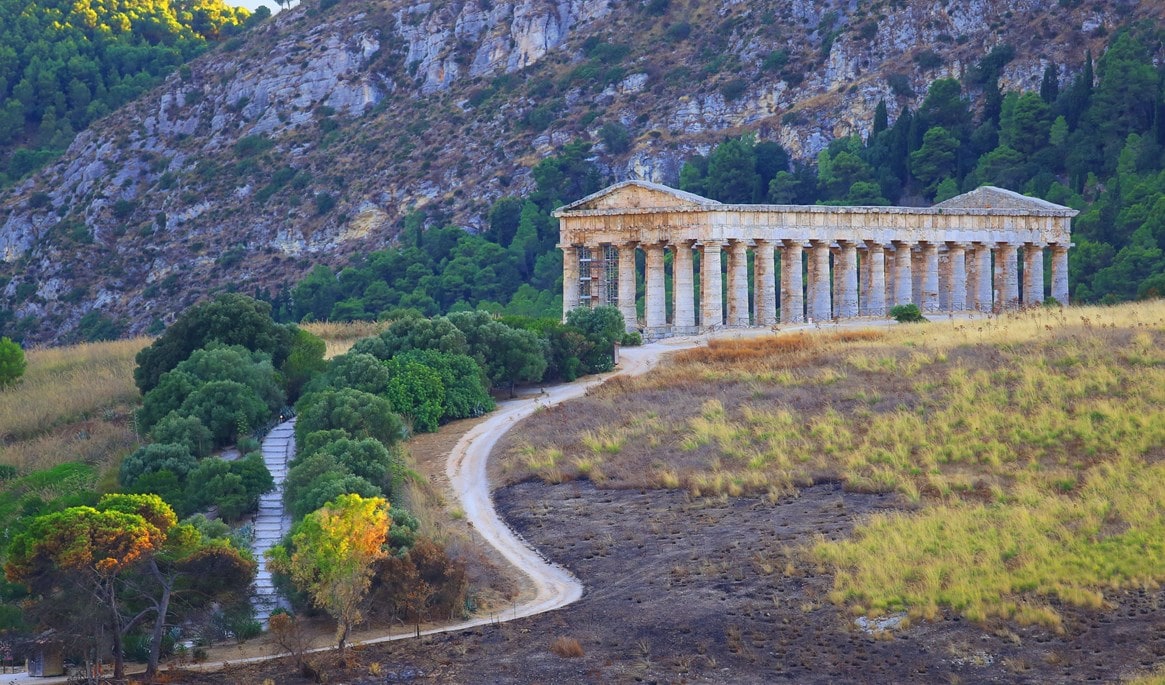 Climb to cave dwellings near Puglia

Keen walkers with time to spare can take on the 170 km trail from Bari to Matera, an hour and a half by car from Masseria Torre Maizza in Puglia. Your reward: arriving at the majestic UNESCO Heritage Site of Matera, where cave dwellings were carved into the rocks millions of years ago. For something a little more approachable, our concierge, Pasquale Bernardo, suggests the final 15 kilometres of the walk. Starting from the shores of Lago San Giuliano, you have all the magic of Matera but compressed into a more manageable three-hour trek.

Begin by stretching your legs at the lake (of San Guiliano) whose bounty includes a fossilised blue whale. As the walk progresses find the Bronze Age calendar set in stone and, as Matera materialises, you’ll cross the Torrente Gravina river gorge on a dramatic suspension bridge.

To reconnect with history and nature contact our concierge team at Rocco Forte Hotels. They’ll be happy to suggest more routes and arrange transport to whichever walk you choose.