The Family Series
Part 1: The Design

You wouldn’t necessarily say there’s a house style to Rocco Forte Hotels. But what there is, in abundance, is style, at every hotel. Since Rocco Forte first acquired and reinvented The Balmoral in Edinburgh in 1998, the collection has innovatively ‘un-done’ conventional hotel design as it’s grown. In its place, it has privileged two objectives: to create a sense of a home in every hotel (albeit a very sleek, elegant home); and to capture, through decor and ambience, a sense of place. What you’ll never encounter when you walk into a Rocco Forte hotel or resort is a commodified brand, identikit feel. Quite the opposite; and very much by design.

That Rocco Forte Hotels was the first to pioneer this new vision for hotel style is down to its director of design, Olga Polizzi. Like her brother Sir Rocco, she learned the ropes of hospitality working with her father, Lord Forte, at Trust House Forte (which later became Forte Hotels), and then over the course of 25 years of developing and designing Rocco Forte Hotels. But her immersion course in taste and original style started much earlier, at home and in famiglia.

“Both my mother and my paternal grandfather Rocco had a real sense of style. In fact, my grandfather had incredible taste, considering that he grew up in a tiny village of 300 inhabitants up in the hill in between Rome and Naples,” Polizzi says. “When he came to England, he bought really nice pictures—and some very good furniture. He had a real eye for something nice and in fact we grandchildren still have a lot of his objects. My aunt worked in the design department [at Trust House Forte] too, and she and my mother were always redoing their houses. So the design thing was always there.”

This penchant for good art, good furniture—be it antique or beautifully-designed contemporary—and the deft mixing of the two has found its way into Polizzi’s signature take on a Rocco Forte interior. “When I first started out, everything [in the world of hotel design] was very simple and minimal,” she recalls.  “Beige and grey were the fashion to my brother’s disgust. Then, bit by bit, it started changing, until now it has gone completely the other way, a mass of colour and pattern is now the look, much to my brother’s pleasure! But I’d always bought at auction and antiques fairs, and blended the old with the fresher and more modern. It was something that came quite naturally; I find it quite harsh in a space to have everything new, even in a new build the odd antique can fit in well. It’s the same with fashion in a way; a mix of old and new often looks good.

Another tenet of Polizzi’s design credo has always been to seek out artisans and craftspeople working locally. Whether handmade tiles from Bagheria for Villa Igiea in Palermo, or Laudomia Pucci’s bold chromatic textiles at Florence’s Hotel Savoy, local designs, “as much as anything, are what give the hotels their sense of being rooted in the place they’re in,” she says

At Masseria Torre Maizza in Puglia, all of the decorative maiolica plates adorning the walls—“I think we had more than 350 of them made”—as well as the ceramic lamps which came from Grottaglie – a town very near the resort.

Polizzi’s eye for beauty and her skill at putting designs from different eras in dialogue is matched by her tireless attention to detail—another quality she attributes to growing up Forte. “My father was incredibly hard working; I learned that from him,” she says. “But I got the attention to detail from my mother. At Christmas, there were sometimes 35 of us young and old for dinner. She and my aunt would spend days beforehand in the kitchen, making ravioli for all those people. It took forever, it was my Grandmother’s recipe and it had to be exact.”

Listening to Polizzi describe the interiors of the hotels she has designed is like listening to her describe people— ones she knows well, and of whom she is fond. Witness her encapsulation of The Carlton, Rocco Forte Hotels’ newest property, which will open later this year in Milan: Milan is chic and so the The Carlton is also chic. Hotel Savoy in Florence on the other hand is the younger, more gadabout sister. Cheekier; pretty—wallpapers and fabrics and pretty things on the shelves. The Hotel de Russie in Rome is much grander in building and in style, the stylish older sister. Olga is also working on a concept for the Rocco Forte House in Milan, which, like its sister property on Rome’s Piazza di Spagna, will consist of lush serviced apartments: These have to be different from hotel rooms as they will have to be loved in weeks at a time if not months, so although they follow the hotel in looks, they have to have more storage, a decent kitchen and more space generally.

Olga is also installing a couple of presidential suites, hanging pictures and making sure everything is just so—in time for high season and exciting openings. “That’s the other way it’s not like home,” she laughs. “You’ve got a date to respect, everyone’s trained and waiting, they’ve sold rooms; you can’t be late, you can’t add later – it is always a rush.

A hotel room must always be welcoming,” she says firmly.  Soft lighting, good bathrooms with space to put down wash bags and concessions to space. Comfort comes first.” 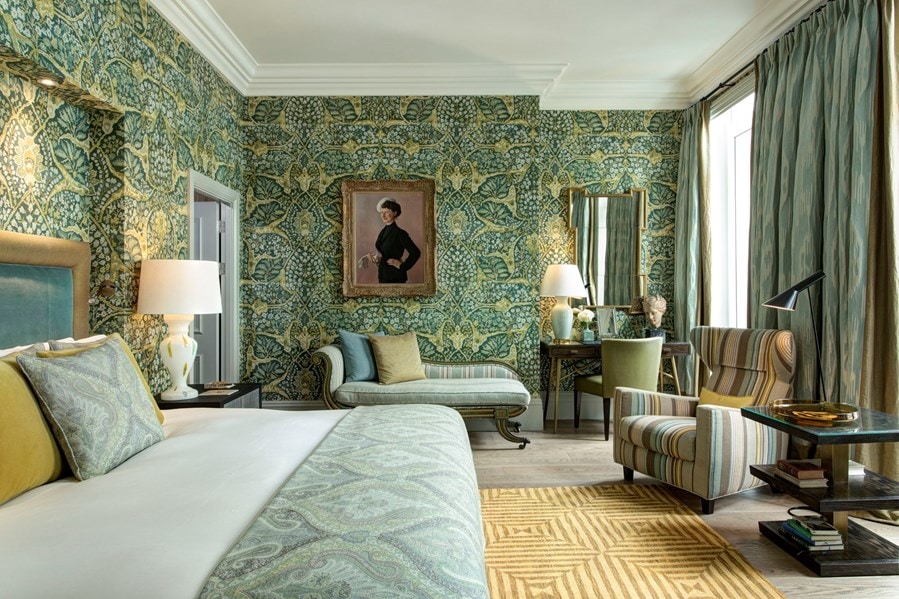 Which brings us back neatly to growing up a Forte, and what Polizzi learned and absorbed from her family: a gorgeous design scheme is always a fillip, but service and comfort—the guest’s—comes first. And that’s an ethos you either have, or don’t. In our business you have to want to serve. “My father always used to say, ‘The best people go into the hospitality industry.’ And I used to sort of raise an eyebrow, and think, Right. But I have learned it’s true; people who work in this industry like to interact with other people and look after them and help them and make sure their guest enjoy themselves and they never say No. And I do think I’ve been very lucky to be in this business, surrounded by good people.”

It’s this value system that informs everything Polizzi does—ultimately, she believes, design has to reflect not just the sophistication and quality of good taste, but the genuine warmth of the welcome on offer. This, too, came from her family, and the lessons of a lifetime. “My father understood people,” is how she encapsulates the legacy, and remit, of making things at once uniquely beautiful and eminently comfortable. “Even at my age now, I still think to myself, Oh, Dad said this, and Dad always believed that. I wish I’d asked him for more advice.”