Your Grand Tour of Italy Awaits

Retrace the path taken by inquisitive explorers and broad-minded travellers in the 18th and 19th centuries on your own modern day grand tour of Italy. Choose our hotels in Rome, Florence and Sicily, and our new hotel opening in Milan in 2023, and add comfort to your cultural journey.

The grand tour of the past

The 19th century equivalent of a gap year, epitomised by Pompeo Batoni’s portrait of Prince Edward Augustus, the Grand Tour led northern European youths to study and immerse themselves in other cultures, especially Italy.

Studying the most popular Italian route, north to south, you’ll discover the great cities from Genoa to Turin, Milan and Florence, Siena, Rome, Verona, Venice, Naples and finally on to Sicily. While Italy’s first tourists took a year or more, travelling by boat, sedan chair and carriage, today you can uncover Milan’s opera scene, Venice’s canal, Florence’s galleries and Rome’s antiquities during an exciting week or two.

Arriving in the red-roofed Tuscan capital, set down your cases at Hotel Savoy. Once rested, explore the untold Renaissance riches of the Medici family or seek out the masterpieces by Giorgio Vasari, Michelangelo and Giotto. Standing in the churches and cathedrals of Florence, you’ll be in the very spot where the first travellers developed their keen interest in art.

Channel the artistic tastes of early tourists and pose to have your portrait painted, invest in paintings as a reminder of your adventures or explore the city with a local artist, learning to sketch and paint while taking in panoramic views of the city from the hilltop Piazzale Michelangelo. 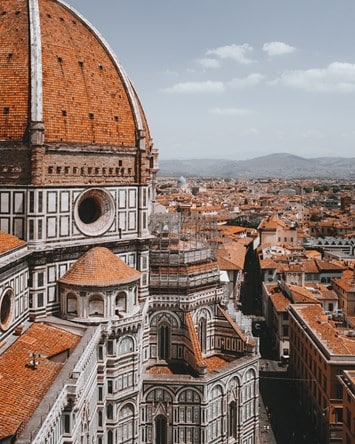 All roads lead to Rome

Continuing south, your next stop is Rome. A rich source of cultural largesse, spanning the Roman Empire to the Renaissance, Italy’s capital was the focal point of many grand tours.

Reference Canaletto’s five large paintings of Rome, commissioned in the 1740s, as essential sites for your modern day tour. Uncover the romantic ruins of the Pantheon and Roman Forum as well as the monumental arches of Titus, Septimius Severus and Constantine, a 10-minute drive from Hotel de la Ville.

Perhaps surprisingly, the Sistine Chapel’s frescoes weren't the most prized Vatican artworks  for the grand tourists. Make your way to the Belvedere Courtyard beyond and see if you can spot the marble statue of the recumbent Ariadne that they admired so much more.

Romantic ruins of Pompeii and Herculaneum

From Rome, the tourists visited the ancient ruins of Pompeii and Herculaneum – eternalised in paint by Italian artist Piranesi. Essential stops on their travels, both can be reached within two and a half hours on a road trip from Hotel de la Ville or Hotel de Russie in Rome.

Italy is not Italy without Sicily

The "clue to everything”. This is how the great German writer Johann Wolfgang von Goethe described Sicily. Be inspired by his words, as the first tourists were, and follow Edward VII, Kaiser Wilhelm II of Germany to Villa Igiea, the beautiful home of the Florio family and now part of our hotel collection.

Immerse yourself in Goethe's “Italian Journey,” and you too will fall for the glorious temples at Segesta and the Valley of the Temples, or the historic towns of Sciacca and Agrigento, an hour’s drive south from Verdura Resort, passing long golden beaches, blanched white cliffs and unspoilt dunes. Share in the poet’s wonder as you arrive at the staggering sight of Taormina and its ancient theatre, returning from your trip restored and, in Goethe’s words, “changed down to the very marrow”.

On your modern day grand tour of Italy entrust Rocco Forte Hotels to help you curate a cultural journey, taking in Florence, Rome, Sicily and, from 2023, Milan, enhanced by comfortable stays in our beautiful hotels.