Once home to the Imperial Russian family, St. Petersburg has long been the cultural capital of Russia. In the reign of Catherine the Great, the city stood as the intellectual and artistic centre of the Western world, the following centuries of creativity and patronage saw a renaissance in architecture, painting and sculpture, as well as, some of the greatest literary classics. Today, the artistic heritage of St. Petersburg is all-enveloping and the centuries of desire to sit at the vanguard of European culture is everywhere you look. Spending a couple of days at the Hotel Astoria gives visitors the perfect base from which to explore the art and culture of the city’s imperial history, its Soviet succession and the 21st century contemporary art scene.

Possibly the greatest art gallery in the world, the State Hermitage Museum was founded when St. Petersburg was at its cutting-edge cultural fore in the time of Catherine the Great. The grand pastel-coloured, neo-classical frontage is home to over 3 million objets and works of art. The collection journeys from highly intricate seventh-century BC Scythian gold to the works of Van Gogh and Matisse. Make sure to plan what to see at the Hermitage and General Staff Building of the Hermitage, otherwise you could spend days wandering the jewel-box rooms open-mouthed in awe.

Not far from the Hermitage is another of Russia’s great museums, the State Russian Museum. Set in the old Mikhailovsky Palace the museum was founded in the dying days of the Russian Empire, the museum’s collection spans over a millennium from the 9th century to present day, and holds the largest collection of Russian art anywhere in the world. After the Russian Revolution the museum was endowed with art appropriated from the bourgeoisie, including the seminal Black Square by Malevich, that was so influential in the deconstruction of modern art. Changing exhibitions that sit alongside the permanent collection means the State Russian Museum sits at the avant-garde of the Russian art scene.

St. Petersburg was at the forefront of the applied arts and is best known today for the bejewelled eggs of Carl Fabergé. The Fabergé Museum holds the world's largest collection of Carl Fabergé‘s masterpieces, including decorative objets, jewellery, silverware and precious haberdashery. Located in the striking Shuvalovsky Palace, the highlights of the collection are, of course, the Easter eggs, which were commissioned by the Russian emperors Alexander III and Nicholas II. 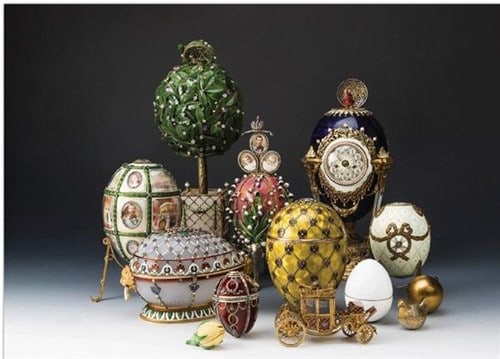 Today, St. Petersburg has once again been seen as an international art hub. Dasha Zhukova’s New Holland Island cultural centre on the Kryukov Canal has gained worldwide attention. While in recent years street art has made a name for itself and redefined public perception of what art is. Not far from New Holland Island is Vasilievsky Island, where you’ll find the Erarta Museum, Russia’s largest private museum of contemporary art. The collection includes 2,800 works of contemporary art created by more than 300 artists from over 20 regions of Russia, spanning a variety of techniques including painting, graphics, sculptures, and installations, that represent the linear stylistic journey Russian art has taken from the early 20th century to the present day.

Also located on Vasilievsky Island is the cultural hub of Sevkabel Port, housed in a cable factory founded in 1879 and one of the oldest businesses in St. Petersburg. This public space faces the Neva River and Finland Gulf and has become a creative outlet for city’s residents. Filled with art galleries, as well as shops and restaurants, the multi-use island space has given artists the opportunity to express themselves on the embankment and within beautifully converted former warehouses.

Raw cutting-edge graffiti may not be to everyone’s taste, but St. Petersburg’s commercial art scene is gathering pace with some highly regarded galleries making waves on the international scene. The Marina Gisich Gallery, founded in 2000, represents some of Russian’s greatest living artists and regularly collaborates with some of Europe’s most respected institutions. Hotel Astoria has set up a special experience with Marina Gisich’s team to give our guests access to the inner sanctum of the gallery to understand more about their artists and view their pieces and exhibits.

The gallery’s position on the banks of the Fontanka, make it the perfect place to take a boat trip down the river, gliding gently past the neo-classical architecture of the old Imperial and aristocratic palaces, with their elegant gardens. 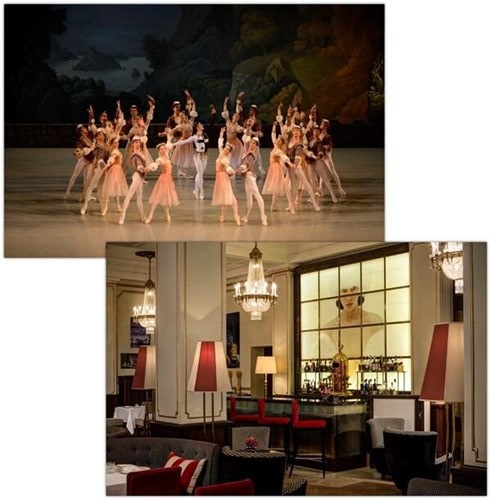 A visit to St. Petersburg isn’t complete without an evening of unforgettable classical opera or ballet at the Mariinsky Theater. This spectacular venue dates back to 1859, built on the site of the old fire-ravaged Bolshoi theatre and named in honour of Empress Maria Alexandrovna, wife of Tsar Alexander II. The ornately designed and beautifully decorated neo-classical theatre has seen the greats of Russian ballet pass through its gilded interiors, with premieres from Tchaikovsky and Prokofiev being staged at the Mariinsky, while legendary dancers Rudolf Nureyev and Anna Pavlova trained at its school. Many of the world’s most renowned conductors, opera singers, ballet dancers and composers have all chosen to stay with us at Hotel Astoria after performing at the Mariinsky.

Spend time at Hotel Astoria to explore St. Petersburg’s centuries of cutting-edge culture, all with easy reach of the hotel. Book your next escape or staycation by emailing reservations.astoria@roccofortehotels.com or calling +7 812 494 5770.