Ready for your starring role? Immerse yourself in the most memorable film sets around Europe. In London, Rome and Sicily, follow in the footsteps of your favourite actors, recreate some iconic scenes and spot the famous backdrops from some of the film industry’s best-loved classics. Camera to hand, you’ll be the star of your own story.

Adding a touch of magic to London’s busy streets, many scenes from the quintessentially British film franchise Harry Potter were shot in the UK’s capital. In the City of London, its beautiful red and gold storefronts of Leadenhall Market were transformed into the bustling shopping district of Diagon Alley. King's Cross Station served as the gateway to the Hogwarts Express while Great Scotland Yard, a 20-minute walk from Brown’s Hotel, became the entrance to the Ministry of Magic. Visit London Zoo and you may well suppress a smile as you recall the scene in which Dudley Dursley gets stuck in the reptile house.

Linked to Britain’s best-known fictional spy – Bond, James Bond – London frequently makes an appearance in his films. Notable landmarks you can visit, hot on the heels of 007, include the Old War Office on Whitehall, the M16 building on Albert Embankment, Somerset House and the National Gallery (sit in Room 34 and contemplate Turner’s painting of HMS Temeraire to be in Bond’s exact spot). Worth a visit for its excellent arts programme, the Barbican Centre appeared in Quantum of Solace and was destroyed in Skyfall while 2015’s Spectre brought us to Bond’s own flat, at 1 Stanley Gardens in Notting Hill.

While you’re in west London you can recreate scenes from Notting Hill around this charming corner of the city. Famously, the colourful neighbourhood serves as a backdrop to many of the shots, including the bustling Portobello Road, where William Thacker’s travel bookshop lies, as well as the iconic blue door at 280 Westbourne Park Road. Less well-known are the film’s scenes captured at the picturesque Kenwood House, a historic mansion located on Hampstead Heath. You can easily spend a day wandering the glorious parkland or exploring the great house and admiring the artwork and stately rooms on display. 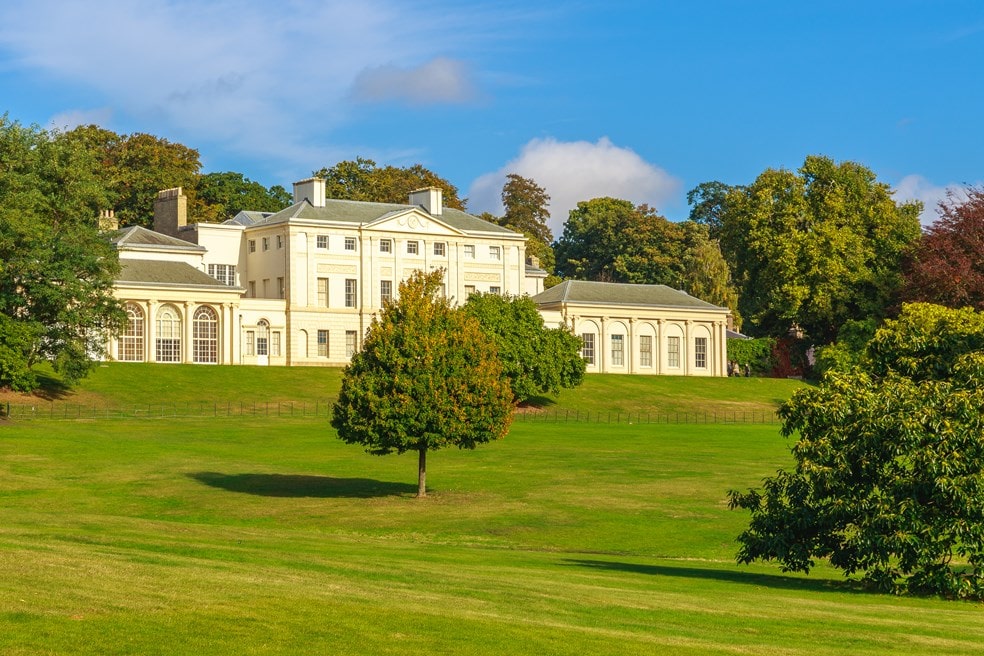 Take your own Roman Holiday

It’s impossible to talk about Rome without mentioning the 1953 film Roman Holiday. Standing at the top of the Spanish Steps, right next to Hotel de la Ville and a short stroll from Hotel de Russie, you’ll be in the spot where protagonist Princess Anne sat, gelato in hand. Looking out at the same spectacular view of Rome, you’ll notice how the silhouette of the city against the sky is remarkably unchanged since the premiere of the film.

Wandering through Rome, you can live out your own Roman holiday and trace the princess’s footsteps through all the filming locations dotted throughout the city. At the Roman Forum, imagine the first meeting of Anne and the charming American reporter Joe, whom she falls in love with. 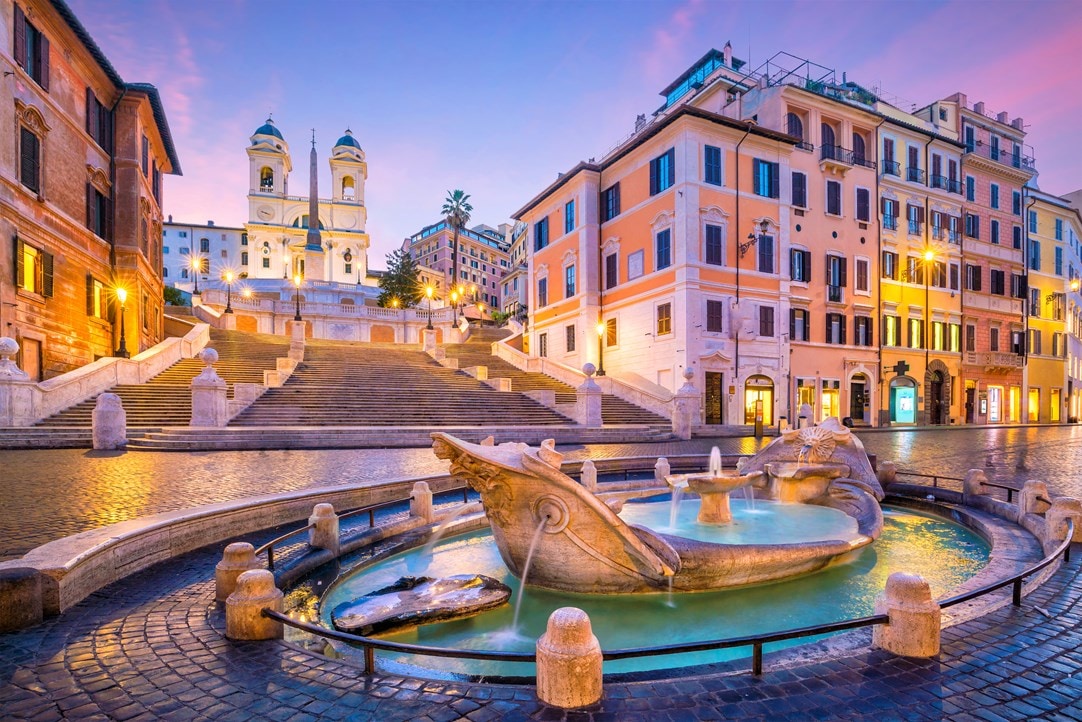 Amble south from the Spanish Steps for half an hour towards the Colosseum, where you can picture Anne and Joe whizzing past on a Vespa. Neighbouring the Colosseum to the east, the elegant and elaborate interiors of Palazzo Brancaccio were chosen to depict the inside of Princess Anne’s embassy in Rome, while Palazzo Barberini – now the National Gallery of Ancient Art in Rome – was the setting for the exterior scenes. Explore both on the walk back from the Colosseum as you make you way towards Hotel de la Ville.

In the third instalment of the Italian cult classic, The Godfather, the family flies from New York to Sicily to see son Anthony’s operatic debut at Palermo’s Teatro Massimo, Italy’s largest opera house. Renowned for its sensational acoustics, its neoclassical columns stand a mere 20-minute drive from our 19th century palazzo, Villa Igiea. Today, you can still sit in the red and gold interiors and be enthralled by an opera, concert or theatrical performance. On the steps outside the opera house, you can also see where Anthony and Mary were shot in the film trilogy’s tragic conclusion.

Stroll five minutes from the theatre and you’ll find the stately villa where they shot the scene as a toast is raised to Anthony’s stage debut. At Villa Malfitano Whitaker – a tremendous Art Nouveau building created in 1886 for Joseph Whitaker – you can wander through manicured gardens, watched over by stone lions, in the sweeping grounds where the wine merchant and keen ornithologist planted different species of trees from around the world. Step inside the villa where Flemish tapestries, frescoes and a grand ballroom provide the perfect setting for your big scene. Only one question remains – are you ready for your close-up?

Travel between London, Rome and Palermo and live out your own Hollywood dreams. Or find out which Rocco Forte hotels have played a starring role in our article, Rocco Forte Hotels on the Siver Screen. 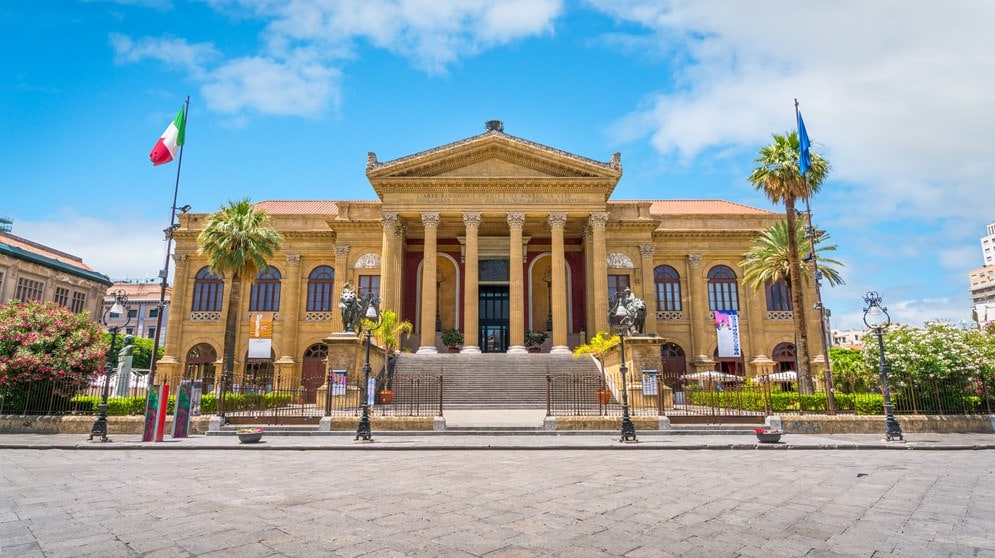