The newest star in the Rocco Forte Hotels portfolio, Sicily’s Villa Igiea—set at the sea’s edge amid the baroque splendour of the capital, Palermo—has heritage and history in spades. It’s a landmark hotel, commissioned over a century ago by an illustrious family, the Florios, and designed and built by Ernesto Basile, the island’s most venerated architect.

Not a place, then, to be trifled with; a fact of which Rocco Forte Hotels design director Olga Polizzi was well aware when Sir Rocco Forte acquired the property in 2018. To breathe vibrant, modern new life into Villa Igiea, while respecting both the beauty of the original architecture and the hotel’s ‘soul’, was going to be no small task. So she entrusted the job to a design team she has long admired: Paolo Moschino and Philip Vergeylen, of London-based Nicholas Haslam Studio.

We invited the three of them to revisit the discoveries, challenges, achievements and satisfactions of their two years’ worth of meticulous efforts. 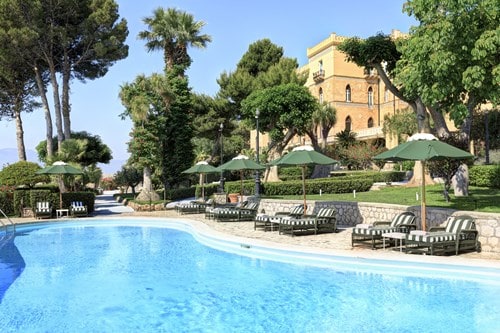 PV: The first time I saw the hotel was six or seven years ago; I organised my sister’s 50th birthday party at Villa Igiea. So we saw it in the state it was in before you and Sir Rocco were involved at all.

OP: You never told me that, Philip! (laughs)

PV: I didn’t…? Anyway, we booked everyone in there, because it was considered the best hotel in Palermo. And you could sort of still see that faded grandeur in it; but it was, to be honest, falling apart. And at one point Paolo and I actually started saying to each other, ‘If only we could work on this place, I’d do this here, and that there, and that one should be moved over there’, and so on. Then one day in 2018 the phone rang in the office and we heard, “It’s Mrs Polizzi.” We assumed it would be about some chairs or textiles you liked—but you were calling to ask us what we would think about coming on to re-design Villa Igiea.

PM: So it was really—really!— a dream come true, not least because we are both enamoured of the story. The history, the Florio family, Palermo. Villa Igiea wasn’t just a place for Sicilians; it was a real international destination, in its day. Everyone and his mother was there.

OP: Exactly—a hundred years ago, every head of state, every country that had royalty: they all went. Millionaires too, major families. And it can’t have been that easy to get there at the time, yet they all went anyway.

PV: And that history really drove the design concept for us. Yes, we’re now in the 21st century and people want a different level of comfort. But I was very conscious that we had to keep the spirit of the place.

OP: And the wonderful thing you two have managed to do is that now, people walk into the hotel and they say, ‘This is as it was.’ Of course, we all know it’s anything but; it’s chalk and cheese, what you’ve made and what it was before. But it feels as if what’s there now has always been like that—just with everything tidied up, in the right place, more comfortable. The feeling you have achieved is, really, one of going back a hundred years. And that’s incredibly clever, and difficult to do. The bathrooms, of course, are totally different. We discussed this early on; that everywhere—anywhere—we had space, we’d put in showers and baths, and bidets. You used that gorgeous dark wood for the basins, which I believe took inspiration from Basile; and all the wonderful local tiles. What you’ve done feels Sicilian—but the really top, top, top-notch Sicily.

PM: When was the first time we were all there together? It was at least three years ago, no?

OP: It was definitely before we started the work. And was there work…! But this is what I enjoyed so much about doing this with you. There are always 20 ways of designing something—some might be good, some not the right ones. You were always open to discussing everything.

PV: And you remember that we also made that conscious decision together that whatever could be made locally, would be. We were not ever going to fly in, you know, a chest of drawers from Japan. The stone was sourced locally; all the marble is local. The tiles of course are probably the best example of that—they’re all made by small manufacturers, because there wasn’t one single one that could cope with the volume.

OP: And what you didn’t have done in Sicily, we still kept in Italy.

PM: And do you remember the local auction house we discovered? Trionfante?

PM: And that part was such fun—that digging to find the pearl. And we did find a lot of pearls. And Benedetto Trionfante himself, like almost anyone you come across in Palermo, is in love with Villa Igiea. I’m not sure you ever heard this story, but at one point we had a problem with lanterns in the bar. We rang him at around 10 a.m. and said, ‘We need two lanterns rather desperately.” And within an hour, he was there with a truck full for us to choose from. And the repairs were made to the ones we chose within another hour or so, and they were hung by the end of the day. Moments like those were not just rewarding, but fun ones. 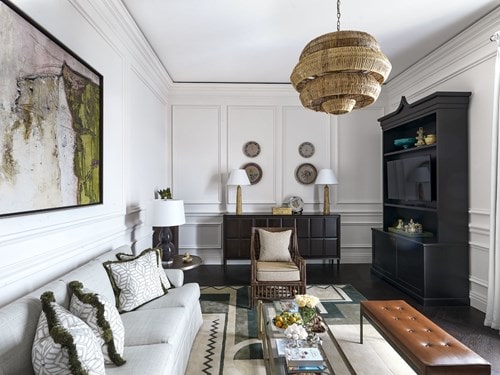 PV: The more challenging thing was agreeing everything with the planning officers, and the Superintendency overseeing on behalf of the city. That was sometimes a bit nerve-wracking for all of us, wasn’t it?

OP: Paolo, you were very good at collaborating with them, at managing that relationship. And we did it, in the end. We were somewhat restricted in the palette we could work work—they were quite firm on that—but it worked very well in the end.

PM: And we were able to do about 90 percent of what we wanted to do.

OP: Back to the design—for me, one of the highlights was the work you did with San Patrignano [the artisan workshop at the eponymous rehabilitation centre in Le Marche for recovering addicts], and I wish every country in the world had one. You ended up sourcing a lot of wall papers from them, didn’t you? A lot of throws…what else did we get from them?

PM: They produced some beautiful wrought-iron chandeliers, and some lanterns.

OP: Really they can make anything, can’t they? It’s rather extraordinary. And of course we kept a lot of the old furniture too, doing that big inventory and looking at everything. Like those gorgeous 17th and 18th century chests in the corridors. And anything of any beauty or value, we wanted to keep. 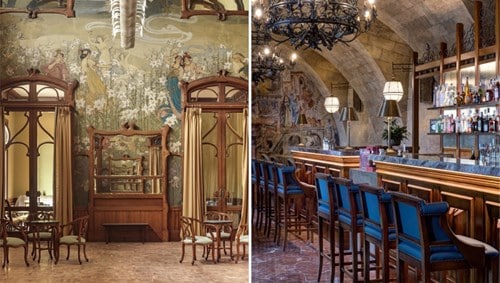 MP: And elsewhere we took inspiration from what was already there, but built on it. An obvious example is the frescoes in the Basile Room—those colours, the deep teal green and blue and rich gold—obviously stayed exactly as they were; they were simply restored. But they informed the palette we used for the wallpapers and the hessians in the rooms. So that was a mix of having to work within the Superintendency’s boundaries, but then elaborating, and being able to be creative.

OP: Thinking about this question of what do I think came out wonderfully, what was a surprise in a good, delightful way: I don’t know about you two, but I have to say, for me, it’s the bar.

PM: Absolutely. The bar is a real success.

OG: I can say this to you now that it’s behind us (laughs), but when I first saw the drawing of the back of bar….I didn’t question it, but I kept thinking, ‘I’m really not sure about that bar scheme; it just looks odd.’ You’d used metal at the top that actually echoed other already existent elements in the space, and I really wasn’t sure about that. But when I finally saw it in situ, I was really surprised—I loved it. And it’s a lovely room now. The wall paintings are showcased much better. And the chandeliers—wonderful. Where did you have those made again?

PV: They came from Gomiero, another excellent artisan manufacturer in the Veneto. Our designs were quite intricate, not easy, but he made them exactly to our specifications. 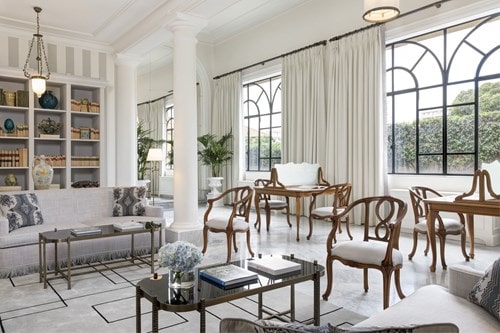 OP: And the other happy surprise is the library. I just love that space now, what you’ve done. Those two old double desks, Basile desks, which are lovely. And the striped walls.

PM: And we were able to get those stripes approved! (Laughs) That was a totally dead space before, and it’s now full of life. We’ve heard from the staff that guests sometimes spend an hour or more in there, lounging or reading.

OP: And then the ladies’ and gents’ loos you’ve created downstairs—how you managed to preserve that extraordinary painted ceiling. Do you remember that room was being used as office space? They had six or seven people sitting in there, and the public never saw it. And you had the brilliant idea to make that sort of box in the middle for the actual lavatories, which doesn’t go up to the ceiling, so everyone can still see those paintings.

PV: Yes, that was a real success. Making a place that was back-of-house a front-of-house one, and finding a way to make this thing that had been totally hidden—and which, in any case, we weren’t allowed to touch—a showcase.

OP: You know, some designers make it difficult, they won’t take any criticism at all. You made things easier. And I loved that we were always able to have a laugh as well. God knows on such a huge job, there needs to be that.